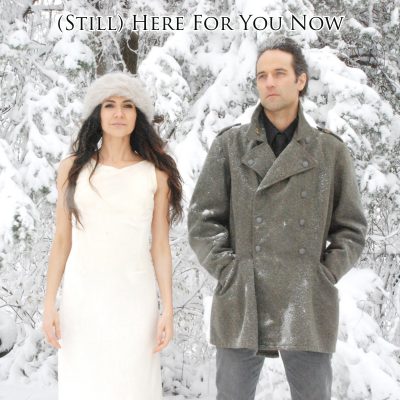 We're excited to share a new, acoustic track from The Smoking Flowers – "(Still) Here For You Now," a companion piece to "Here For You Now" from last year's Let's Die Together LP. With influences that range from Led Zeppelin to Gillian Welch and The Ramones to Neil Young, the powerhouse band is built around the chemistry between Kim and Scott Collins. The urgency of their recordings cannot be faked, and 2018's Let’s Die Together is a true story that paints a picture of a couple that lives together, writes together, plays together, and simply loves life together. The furiously passionate rock-oriented album was conceived during Kim's ultimately triumphant battle with an aggressive form of breast cancer, and it is being followed this year by the acoustic album Snowball Out Of Hell. "Here For You Now" is one of two songs that appears on both albums, and according to The Boot, "The new rendition showcases the softer side of the song's message, an ode to commitment and standing united against life's toughest challenges."

"Pyramids are some of the most mystical, powerful and protective structures in the history of the earth," the band explains. "Writing, recording and producing Let's Die Together and Snowball Out of Hell was like erecting a personal pyramid for us. When erecting a pyramid, three cornerstones are required. The songs "Here for You Now" (a love letter from Scott to Kim), "Let's Die Together" (a love letter to each other) and "One Friend" (a love letter to a friend) were those cornerstones." They continue, "Those songs gave us immense strength, purpose and protection during a rough time in our lives. Every time we play any of those songs in our live shows, we keep adding stones … building that pyramid higher." The two albums are being packaged together for a June 21 release.

"Sure to melt any heart." -Paste