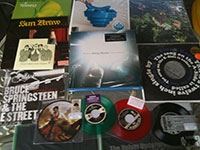 Hope you had a good weekend. Mine was full of fun. Saturday was Record Store Day. I went to four different stores in Los Angeles: Origami, Vacation, Amoeba, and Rockaway. Here a look at my stash of Record Store Day finds. It was so exciting to see the Built to Spill 7″ in stores with my drawing on the cover. All of the stores were packed and Record Store Day seemed to be a huge success around the world. Thanks for supporting your independent record stores. Saturday night we did a S**tledger Radio Broadcast and then went dancing at The Echo’s Funky Sole night.

Sunday was full of sports. I went to the Dodgers vs. Giants game where a great pitchers’ duel ended with Manny hitting a pinch-hit 2-run home run to win the game. Later on I watched some of the NBA playoffs, and was happy to see both the Mavs and Blazers win.