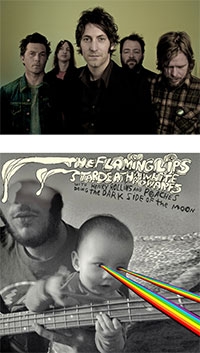 This week is a big one for new music. On Wednesday, May 12, we’re digitally servicing the new Everest album, On Approach, and the music keeps coming on Thursday, May 13 with The Flaming Lips‘ cover of Pink Floyd’s Dark Side of the Moon.

On Approach, the second LP from Los Angeles-based band, Everest, “has all the good things that make a great record,” says the album’s producer/mixerRob Schnapf (credits include such modern classics as Beck’s Mellow Gold &Odelay, Elliott Smith’s XO & Figure 8, as well as Foo Fighters ’ eponymous debut). “This record has a familiarity yet doesn’t copy anything. It’s expansive, and it doesn’t sit in one place. Listening back to the final version, I realized it was like an old-time record experience, one you don’t get any more.”

The band’s currently touring North America, so check tour dates here and see the live show in a city near you.

The Flaming Lips released their cover version of Pink Floyd’s Dark Side of the Moon on iTunes in December, some limited edition seafoam green vinyl came out on Record Store Day and Thursday will be your chance to spin the album while your listeners can buy the CD in stores (out now).