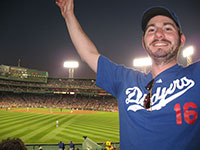 I just got back from a great weekend out in Boston. Thanks to Steve, Doug, and Canada from Pirate! for showing me a good time on my first trip to the city. Most of our days were spent watching sports. Besides our daily intake of World Cup we went to two games at Fenway Park, including Manny Ramirez’s first game back in Boston. The streets were saddened on Thursday night after the Lakers beat the Celtics in Game 7 of the NBA Finals. I’m not a fan of either team, but it would’ve been fun to celebrate in the winning city. On Saturday we went up to Maine and stopped at the coastal town of Ogunquit. We had a nice walk along the Atlantic Ocean and had some delicous lobster for dinner.