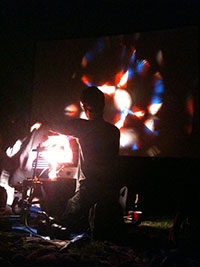 Last Thursday a group of us went to a backyard Solstice Salon Screening featuring rare film shorts from the late 60s / early 70s. There was some short documentary work, freakout music performances and psychedelic animation, with live sitar and tabla accompaniment to the silents. They also debuted a projector kleidoscope that my friend has been building over the last year. I went to two of the Dodgers vs Yankees games over the weekend. Unfortunately the Dodgers lost both games by one run. And I’m still watching plenty of World Cup.