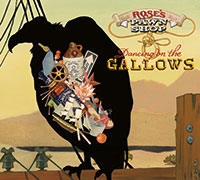 Rose’s Pawn Shop is the kind of band that was made for non-comm radio.   Described by AOL as sounding like “Del McCoury meets Mick Jagger”, this genre-bending group booked their own prolific tour (see dates here) and has self-released two albums.  Their sophomore release, Dancing on the Gallows, iscurrently looking for spins.  We encourage you to support indie music and spend some time with this album.