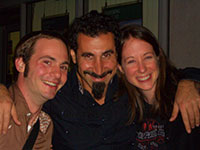 I had a great time out in Baltimore, MD last week presenting on my film screening campaigns at Noise In The Basement. I returned to Los Angeles just in time for the hottest day in history, reaching 113 degrees. Last night I went out to see The Black Keys put on a super show at the Palladium. It was great to finally see them play songs from Brothers. Tonight I’ll be heading down the street for an excellent show that is happening in the Eagle Rock neighborhood. The brilliant Austrian electronic artist Fennesz is making a rare appearance. Also performing is Deakin (Animal Collective), Prince Rama (Paw Tracks), and Sun Araw (one of my 2010 musical obsessions). Going through some old photos I found this one of Serj Tankian, Fawn, and I from CMJ 2007. I thought it was appropriate to share as I’m currently helping out with his new album Imperfect Harmonies.