All about Jessica Lea Mayfield 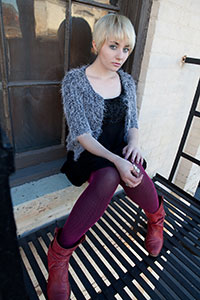 Kent, Ohio native Mayfield, at least as she portrays herself on record, could have walked out of a darkly dramatic Black Keys murder ballad like “Ten Cent Pistol.” In fact, many of the duo’s fans first learned of Mayfield through a soulful duet with Auerbach, “Things Ain’t Like They Used To Be,” that memorably closed the 2008 Black Keys disc, Attack and Release. Auerbach discovered Mayfield through her 2005 EP White Lies, self-pressed in a single run of 100 copies, that she’d cut at home with her brother, David. Auerbach was impressed enough with this bedroom recording to contact Mayfield via her Myspace page, leaving a simple message: “Hi, my name is Dan, and I play with a band called The Black Keys out of Akron.”

Together, they embarked on recording Mayfield’s bare-bones first album, the independently released With Blasphemy So Heartfelt, which garnered an 8.2 rating on Pitchfork and uniformly enthusiastic reviews elsewhere. NPR’s World Café declared she has “a mature sound that seems evolved beyond her years,” while the New York Times added that her sound is “guarded, insinuating, mesmerizing…music that lets you hear all its details.”

“There are so many things about this album that I was excited about,” Mayfield says, “and one of them was to have my live band members”—guitarist Richie Kirkpatrick and drummer Scott Hartlaub—“plus my brother and Dan Auerbach in one room together, collaborating and working. The last album was basically just me and Dan. This was the perfect studio band. Everyone created the new album together and it just sort of happened naturally. Listening to it now is like opening a present.”

On her previous album, the vicissitudes of love were also a recurring theme—but on that effort it was her own pain she was exorcising. This time the tables have turned: “It used to be me getting my heart broken; now it’s about me breaking other people’s hearts. It’s not something I sat down and intended to do—to write an album of songs about being mean to boys. But it’s kind of what was going on. You meet a boy at a show and then they’re like ‘Oh my God, I fell in love with Jessica Lea Mayfield last night…’ They obsess over you, so eventually you have to write a mean song about them. I guess it’s all I can do. I’m not going to get married and have someone’s baby. I have a career.”

Tell Me may be dark, but it’s not dour: “There is a sense of dry humor in my work, especially with this new album. There’s a lot of secret, maniacal laughter going on. Even as I was writing the songs, I’d say, ‘Dan, I can’t say that,’ and he would reply, ‘Yeah, you can, that’s what you feel’. I’ll write something and the moment I think I can’t sing it, then I realize, oh shit, now I really have to do this because this is a really serious, deep emotion, something I really thought that I’m almost afraid to say. That’s what people relate to and I know that. I have to let down my guard, even though it’s really hard to do.”