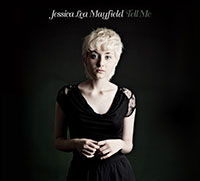 Thanks to those of you that are already spinning Jessica Lea Mayfield’s stunning Nonesuch debut, Tell Me. The album was the #1 debut this week on the CMJ Top 200 and CMJ Radio Select Albums charts, and the single “Our Hearts Are Wrong” was the top debut on the Radio Select Tracks chart. The record has already cracked the Top 5 at influential stations KEXP and KCRW. If you haven’t checked out this album yet, now is the time.