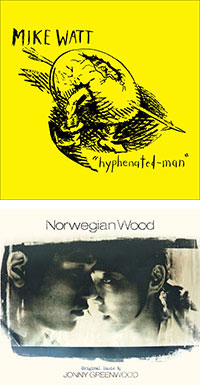 This week you’ll be receiving two excellent new releases. The first is hyphenated-man the new album from art-punk legend Mike Watt. When not playing with theMinutemen, fIREHOSE, The Stooges, and collaborating with many others,Watt has has continued writing, recording, releasing, and touring on his own solo material as well. The new album is Watt’s first solo record in 7 years and was inspired by re-listening to his classic Minutemen output. hyphenated-man is Watt’s third opera, consisting of one big piece made of 30 ‘econo’ tiny tune parts.

The second release is another brilliant score from Jonny Greenwood for the filmNorwegian Wood, based on the Murakami book. The soundtrack also features 3 songs from German kraut-rockers Can.