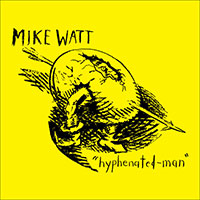 Mike Watt of The Minutemen, fIREHOSE, and The Stooges is releasing his first solo effort in 7 years! Watt has been seminole in the development of punk and independent music. His first solo album, Ball-Hog or Tugboat, included guests like Henry Rollins, Eddie Vedder, J Mascis, Frank Black, Flea, members of Sonic Youth, Nirvana, Beastie Boys, Screaming Trees, Meat Puppets, and more! His latest record, hyphenated-man, is the first release on his own label clenchedwrench. The album was inspired by re-listening to his classic Minutemen releases and was recorded at former Pere Ubu bassist Tony Maimone’s New York studio. Watt is calling the album his third opera, consisting of one big piece made of 30 ‘econo’ tiny tune parts. The art-punk legend will be heading out on a North American tour this Spring and clenchedwrench will be the home of future Mike Watt solo records and collaborations so look out for more in the coming year!