Catching UP With Graham 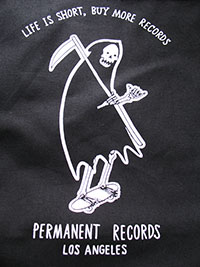 What a great weekend. On Friday evening I stopped by the Yo Gabba Gabba art opening at Meltdown Comics and then went over to the Troubadour and saw Archers of Loaf play a reunion show. They’re one of my favorite bands from back in the day and they played an awesome set of some of their best songs. It was also announced that day that Merge Records is going to be reissuing their long out of print catalog. On Saturday Permanent Records  from Chicago opened a new record store in Eagle Rock. They had a great selection of new and used vinyl and some CDs and cassettes as well. Here’s a picture of the tote bag they were giving away. On Saturday night I went out to my first screening of the year at Hollywood Forever Cemetery and saw Harold And Maude for the first time. Andy Votel from Finders Keepers spun records before and after the movie.