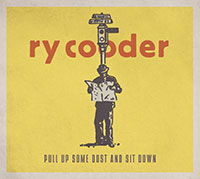 Pull up Some Dust and Sit Down, the latest album from Grammy award-winning musician and composer Ry Cooder, is our add at radio this week.

With the New Yorker lauding his musicianship for being “expressive, elegant, and rhythmically intricate,” Cooder tackles concerns in modern American politics such as economic uncertainty and the widening ethical disparities between the privileged and the poor while drawing musical inspiration from Americana, the blues, mariachi, and the Old West in his new album.

Creative, sincere, and emotionally charged as ever, Ry Cooder doesn’t disappoint with Pull up Some Dust and Sit Down.