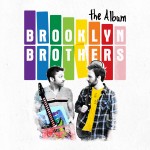 Brooklyn Brothers have had a busy fall so far. Their self-titled debut record, which combines poignant, twee folk with cheery children’s toy instruments, went for adds a couple weeks ago. The record debuted at CMJ this past week at #116 and is poised to climb the charts this week.

Their film, Brooklyn Brothers Beat the Best, is starting to see debuts across the country as well. The film made its Philadelphia and New York premiere earlier this month and hit Seattle, Portland, and Los Angeles this past week. The Los Angeles Times reviewed the film on the day of its local debut and recognized its “raucous good humor and prickly drama about being young, talented and directionless.” Read the full review here. The Seattle Pi says “the original soundtrack and live music performances in the film give [it] a charming authenticity that makes the film heartwarming and hilarious”. Read the review here. To celebrate both the release of the album and film, the duo have been performing across the country.

If you are interested in setting up a screening, please contact us to get started. Let us know when, where, and the capacity of where the screening will take place, as well as where to send the screening materials. Screenings can take place now. The film is 97 minutes long and we ask that no admission fee be charged. In addition to the DVD of Brooklyn Brothers Beat the Best, you will receive posters to help promote the event. If you’re still looking to put on a station event this semester — this is a great, easy, no-cost opportunity. Contact us for more information today!

Note: this film contains explicit language & may not be suitable for viewers under 17