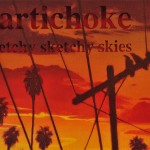 Indie pop band Artichoke and its ringleader Timothy Sellers are known for a dozen years of quirky live shows and almost as many concept albums. Subjects range from the lives of scientists, bees, and an arkload of animals to Highland Park, their neighborhood in northeast Los Angeles.

Standout tracks include “The Market of Farms” which transports you to Beck-with-sitar style to the dusty but nutritious farmer’s market in Highland Park. “How Long Til the Jesus Satan Reunion Tour?” is the story of how Jesus and Satan escaped the monotony of their lives by swapping characteristic behaviors and forming a rock band that eventually grew to be “bigger than The Beatles.” Sometimes even deities get the blahs. “I’ve Got A Proposition For You” is a poetic rocker. Its lyrics were taken directly from a spam email that attempted to swindle soft-hearted and soft-headed people out of their bank account numbers. The black humor of “It’s So Easy Being Me” makes the song seem like a lost gem from the soul of Hank Williams.