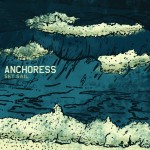 Anchoress is a 4 piece hardcore punk band hailing from Vancouver, BC whose razor sharp wit is matched only by their frenzied yet deliberate sonic attack. Anchoress is comprised of Rob Hoover (Vocals), Keenan Federico (Guitar, Vocals), Ricky Castanedo (Bass, Vocals) and Chris Lennox-Aasen (Drums). They are gaining new fans and critical acclaim at every turn and they show no sign of slowing down. Having graced the cover of BeatRoute Magazine with their friends Jen and Sylvia Soska (The Twisted Twins), appeared in multiple Georgia Straight features and received regular airplay on Canadian radio, Anchoress are continually proving that they are capable of living up to the hype that is surrounding them.  They have shared the stage with the likes of Gallows, DevilDriver, Trash Talk, Cancer Bats, Guttermouth and Baptists, and have recently collaborated with 3 Inches of Blood and Andrew W.K. on a cover of Andrew’s cult classic “Party Hard”. With the help of Defiled Under Music, they are ready to have their independent efforts amplified. With their debut album set to hit stores in the spring of 2013, we are excited share the lead single “Brooks Was Here” with you.