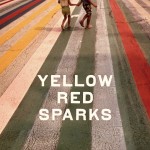 The songs of Yellow Red Sparks, a folk-pop trio based in California, are twisted tales told through cinematic, often epic orchestrations. In the group’s spectacular and creepy new video, for the song “A Play To End All Plays”, a couple’s failed relationship is acted out like an old circus sideshow before a finger-wagging audience. Take a look at the video here! Josh of YRS recently spoke with BreakThru Radio about their upcoming tour and the new album. Listen to it here.