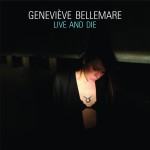 Canada-born Geneviève Bellemare began making a name for herself playing shows in the Pacific Northwest of America. Having primarily grown up with church music, and then being later introduced to 70’s FM artists and jazz, she has crafted her own distinguishable sound. Brandon Lieberman, Music Director at Portland’s KBOO said, “If I could have only called a broker to buy stock in Geneviève I would have immediately grabbed all the shares I could!” The young Québécoise’s unending ambition brought her to Los Angeles to pursue a solo career. There, Bellemare was quickly picked up by the world-famous Verve Records and given a talented studio team, whose credits include significant and diverse acts like Paul McCartney, Elvis Costello, Pearl Jam, and Queens of the Stone Age, to realize her vision. The result is the Live and Die EP, a velveteen marriage of ominous trip hop and airy French pop with tinges of old-school jazz.