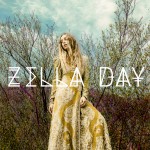 Zella Day was raised in an artistic community, high in the mountains surrounding the Phoenix valley. Until now, her music has barely entered the public sphere, but Zella’s self-released demos and collaborations caught fire throughout the indie community, and her new, self-titled debut EP overflows with her sultry, hook-doused, pop sound. Immersed in music from a young age, Zella grew up singing Bob Dylan covers in her family’s coffee shop; from Dylan’s music, Zella’s love for lyrics continued to grow. Her influences have a subtle, underlying impact on her self-titled release, yet blend with her captivating, nuanced vocals and songwriting for a fresh pop twist. With swelling synths and melodies, Zella incorporates the eclectic sounds of the West Coast into her simplistic roots. Her latest singles, “Sweet Ophelia” and “East of Eden” prove that Zella Day has only just begun to reveal her spectacular musical talents.

“‘Sweet Ophelia’ from Zella Day just might have the best pop songs we have have heard so far this year…the chorus is one of the most powerful.”
– My Old Kentucky Blog

“Zella Day’s ‘Sweet Ophelia,’ one of the most charming pop songs we’ve heard this year”
– Noisey