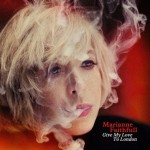 Marianne Faithfull marked the 50th year of her career with the release of her newest album, Give My Love to London. However, a long and successful career does not come without hardships. The Telegraph recently published an interview with Faithfull where she opens up about her drug addiction. She also elaborates further about the meaning behind the Rolling Stones song she wrote with Mick Jagger, “Sister Morphine.” The full article can be read here. For those unfamiliar with her dark and enigmatic work, Entertainment Weekly made a list of “10 essential songs by Marianne Faithfull“. Read and listen to the feature here.

Faithfull‘s album reached a new peak at CMJ before the new year, landing at #28. Help this monumental record reach the top 20 today!