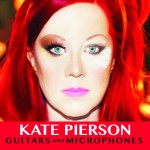 Kate Pierson, iconic voice and founding member of the punk, genre-defying band The B-52s, has announced her debut solo record Guitars and Microphones. The B-52s changed everything with their kitsch-spitting Americana realism – becoming one of non-commercial / college radio’s first staple artists. On her new album, she extrapolates on that tradition in a way that doesn’t sound out of place in the 21st century. The album was produced by Tim Anderson (Banks, Low), features guitar by Nick Valensi (The Strokes) and executive produced by Sia, both of whom also helped co-write on several tracks. Kate’s soaring emotive vocals on “Mister Sister“ is a poetic love letter of the power of transformation. The “Mister Sister” music video features Fred Armisen (Portlandia, SNL) and premiered on Pitchfork last month – watch it below.

The Guitars and Microphones Sampler is a precursor to the full-length album that will be landing in time for a 2/17 Add date.