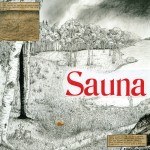 Stereogum premiered Mount Eerie’s single “Dragon” off Sauna, as well as the video for the self-titled track. The most “hi-fi” record Mount Eerie has yet created, Sauna is an intricate trace. Mount Eerie mastermind, Phil Everum (fka the Microphones), calls the album a working of “vikings, zen, and real life.” The album was digitally serviced last week, and this week Sauna ranked #4 most added at CMJ Radio 200. The video, co-directed by Elverum and Allyson Foster (Hungry Cloud Darkening), is a tinkering of strangely powerful images, power plants, cowgirls, and the Pacific Northwest – making for a scene that could’ve been on David Lynch‘s Twin Peaks. Watch the video for “Sauna” below, and listen to “Dragon” here. Sauna has joined the conversation regarding early 2015 releases that are in strong contention to end up on Album of the Year shortlists. Get the record started today.