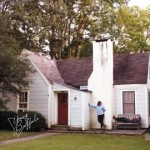 We are so excited to have Young Buffalo at #22 on the CMJ Radio 200 chart! The band’s debut album, House, is being touted by stations like WBWC, KUMD, WUTK, Iowa Public Radio and more. On the heels of their shows at CMJ, which resulted in their signing to label Votiv, Stereogum premiered the single “My Place”, saying the track borrows from “New York greats from Television to the Strokes and the sunshine sleekness of California acts like Local Natives and Delta Spirit“. Check it out here. The video for their track “Sykia” chronicles the band’s adventures on the road – from hotel pools to radio stops at stations like KUTX – watch it all unfold below.

Help give the young group from Mississippi a spot alongside acts like Screaming Females and Of Montreal on the top 20!