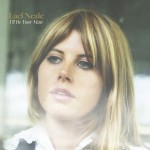 Lael Neale is set to release her debut album, I’ll Be Your Man, on July 10th. Raised in the pastoral hills of Virginia, Neale takes musical inspiration both from the solitude of idyllic pastures and the energy of Los Angeles, where she currently resides. A songwriter who wrote everything on her debut, Neale navigates through her own winding search for essence and meaning, detailing experiences that we all can recognize in our own lives. Though her voice warbles with vulnerability, her delivery is stoic – sometimes irreverent – and her melancholy verses are laced with subtle humor.

The LP’s first single, “Born in the Summer,” is inspired by early adolescent years filled with feelings of awkwardness and self-consciousness, with undertones of the knowledge that someday those growing pains will recede. It’s a powerful summer anthem from a delicate feminine voice, and according to Culture Collide, which premiered the track, “[‘Born in the Summer’] is a hazy mix of psychedelia, lo-fi production, and folk with just the right amount of edge. At the same time, there’s a vulnerability to Neale’s voice that sucks us in to the dark side without us even knowing it.”

“Lael’s crystalline voice… confirms her as the songstress who will save us from darkness.”
-Rock NYC