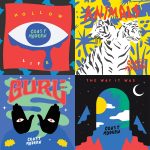 Luke Atlas and Coleman Trapp met while working as Los Angeles-based songwriters, fellow rats in the race to land songs with mainstream pop artists. After more than two years of peddling some great, some terrible, and some very weird creations, they received little more than fleeting glances before a discouraged Trapp escaped for the mountainous serenity of Colorado. “I actually started thinking I might never go back,” he recalls. Yet, without the pressure of writing-on-demand, he began messing around on a borrowed acoustic guitar and recording tossed-off ditties on an old cassette recorder. The pure, child-like enjoyment of writing only for himself led him to a realization: maybe he’d overlooked a path that was in front of him the whole time. Soon, Trapp’s warbly recordings began appearing in Atlas’ inbox. “They kept randomly getting stuck in my head” says Atlas, who further encouraged Trapp’s experiments. “It felt like this could be something,” Atlas recalls. “I told him to get his ass back to LA.”

Since then, the pair has developed an aesthetic that combines their admiration for the spirit of misfit alternative bands and the fearless ethos of modern hip-hop. Their first single, “Hollow Life,” mashes plinking marimba with angular fuzzy bass and booming 808 kicks, while follow-up “Animal” explores the struggle between animal desires and actualization of a higher self. The tracks were followed by “Guru,” a breezily romantic song inspired by dancehall and The Beach Boys, and “The Way It Was,” which continues expanding the duo’s aesthetic with a jaunty, tropical beat that gradually transforms into a twisted and skewed dub banger. Those tracks both hit #1 on the Hype Machine and contributed to the group’s overall viral success. So far, Coast Modern’s brief discography has been streamed more than 12 million times on Spotify and has earned the band spins on stations including KCRW and KEXP; features in publications like Interview, NYLON, Vanity Fair, and Entertainment Weekly; and tour support slots with BØRNS, The Temper Trap, The Wombats, and The Meadows.

“[Coast Modern] finds a sweet spot with pop melodies, unforgettable hooks, and elements of rock, and the reception has been fantastic.” -Pigeons and Planes