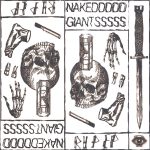 ON TOUR WITH CAR SEAT HEADREST

A three-piece garage rock wildebeest from Seattle, Naked Giants combine spontaneity with a stylistically-diverse catalogue to create a sound that sets them apart from your average garage rock band. Bringing together influences from the likes of Ty Segall and the Sonics as well as Pink Floyd and even Spinal Tap with an audible energy that gets any crowd doing the twist, the band has amazed fans at Seattle’s Bumbershoot Festival and at South by Southwest while earning an opening slot on the upcoming Car Seat Headrest tour. On Naked Giants’ new R.I.P. EP, Grant Mullen‘s bluesy guitar solos, Henry LaVallee‘s pounding backbeats, and Gianni Aiello‘s juicy bass lines combine to form a psychedelic whirlwind of fuzz.  The band jumped into Seattle’s music scene by playing to teens in museums and to sweaty college kids at packed house shows, and the trio has carried the same pure rock ‘n’ roll energy regardless of the audience or venue.

This energy is not lost in the studio renditions of the band’s songs that made it onto R.I.P., which rages from the opening chords of “Easy Eating” through the yelping howls and squealing feedback of “Ya Ya.”

“Naked Giants tear through scorching refrains, thunderous builds, and deep-rooted hooks with an all-natural ease. Freewheeling rock and roll with a don’t-give-a-damn attitude.” -The Line of Best Fit

“There’s a pureness to their sound, a refreshing youthful enthusiasm like they’re the first punkers to ever punk, a completely un-ironic and unabashed immersion in [the] musical tradition…” -KEXP