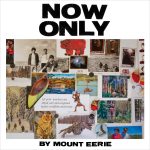 Pitchfork says “Distortion,” the new single from Mount Eerie, is a Best New Track. “On Mount Eerie’s new song,” writes the site, “death is still real, but its scope has expanded. It’s no longer confined to the few months before and after [his wife] Geneviève’s death, though he still calls to her, still refers to her as an enduring “you.” Geneviève is present, a vivid memory coursing through his every living moment, as [Phil] Elverum strains to imagine his future and drifts into philosophical reveries… As Elverum continues to pick at impossible questions, he situates Genevieve’s death within the full context of his life.” The entire analysis is worth reading, right here.

“Distortion” is at radio now; full length album Now Only comes out in March. Mount Eerie will also be playing a few shows: