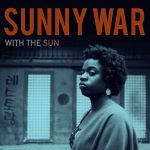 While Sunny War might be a new face at radio, she’s been on the radar of certain music fans for a while now. We recently dug up this article from The Country Blues, which eloquently explains the appeal of War and deftly indentifies the creative promise that she’s since brought to fruition on her new album With The Sun.

According to the site, “Sunny War is one of the most exciting new voices in the acoustic blues. Not just because she is edgy, with an undertone of anger and rebellion, like the punk players, but because she is so deeply rooted in the blues and because she has something to say– original, powerfully expressive and creative. Her voice carries undertones of anguish, agonizing struggle and hardship, yet a raw sensitivity and vulnerability. This is a very young woman who has made it as a musician on the streets, who has roamed and rambled. She is very heavy, very deep. She will be very important.” Interested? Read the whole article here.