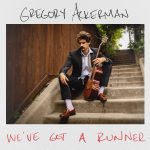 Americana Highways has the premiere of “We’ve Got A Runner,” Gregory Ackerman‘s new single and one of the tracks on his forthcoming Stresslove EP. The feature includes a quote from Ackerman, who explains that the song was composed “after college after a break up. I recorded it in my room and posted a demo version on SoundCloud in 2015, but always wanted to resurrect it in a studio.” The studio version, like the EP from which it is culled, was produced and mixed by Pierre de Reeder (Rilo Kiley).

Check it out via Americana Highways here.