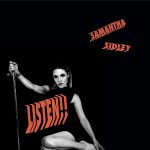 Samantha Sidley’s Interior Person, the full length LP due out in September via Release Me Records, is a testament to the jazz singer’s lifelong love of vocalists. “My whole life was a song,” Sidley says of her childhood. “If I looked at a tree, it was a song. If I felt happy, sad, joy, it was a song… I’ve always considered myself an interpreter, which is sort of an undervalued art form. I like to take a song and make the story true for me.” The record was produced by her wife Barbara Gruska (The Belle Brigade, Fiona Apple, Ray Lamontagne), who also drums on the LP, in a studio Sidley built in her childhood bedroom. Says Sidley, “My record sounds exactly like what I needed it to sound like – the old records I grew up on, mixed with now and the future.”

We’ve shared two previous singles from the LP, album opener “I Like Girls” and Beach Boys cover “Busy Doin’ Nothing.” Written for Sidley by Lilly and Gruska, “Think!!” is the album’s third advance single. About it, Sidley told All About Jazz, “we really wanted a song with a ‘refrain,’ a rubato intro that I could play with, like a classic early jazz song.” Gruska explained in the same feature, “Sam, Alex and I share a deep annoyance with people who don’t listen. Whether they’re not listening to other people’s words, the real meaning beneath people’s words, nuance in music, or nuance in everyday life, we’re irritated by it all! … If you know a steamroller and share this song with them, maybe they’ll listen!”