Burt Bacharach Tells Forbes About How Great Melody Federer Is 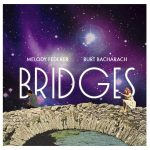 Burt Bacharach, the legendary songwriter who has shown no sign of wanting to retire from a career that has already spanned more than 50 years, recently teamed up with Melody Federer for new single “Bridges.” It’s got a classic-sound that recalls Bacharach’s 1970s work with Dionne Warwick, yet it’s fresh and undeniably of the 21st century.  Bacharach recently spoke to Forbes about his past successes and his new venture with Federer. “I like the way she sings,” he told the site. “I like her quickness. She’s just damned good and I think she’s got a future.”

Apparently she has a future with Bacharach, who revealed in the interview that the two are cooking up another song together. Read more about their collaboration here, and get “Bridges” on the air now.