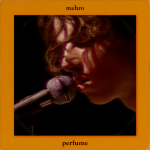 Alfitude has the video for Mehro‘s “Perfume,” which the site describes as having a “beautifully simple, yet heartwarming sound.” See the debut video, which looks like it was taken from a TV show in the late Sixties or Seventies, right here.

Mehro is currently accompanying Elohim and Bahari on The Group Therapy Tour. The tour moves to East Nashville tomorrow, with a stop at The Basement East.