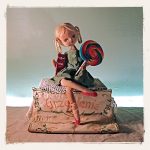 Moments can never be forced — they just happen. But one of the best things about moments is that, when given enough time, they tend to circle around again. Figg, the Seattle-based duo of Robin Peringer (Modest Mouse, 764-HERO, Band Of Horses) and Gilden Tunador, began playing music together in the band Carissa’s Wierd and were originally scheduled to release their self-titled debut album a decade ago. Their record deal fell apart, however, and the shell-shocked duo eventually put it out for friends without any promotion or fanfare. Yet that limited release caught the attention of legendary station KEXP, which picked up lead track “A Case Study in Plagiarism” as a Song Of The Day and described the band’s sound as like “Nancy Sinatra’s spaced-out work with Lee Hazlewood, if she was raised on Slowdive.” Figg was revived, and this development excited Peringer and Tunador to start writing and stockpiling new songs while finally releasing and giving their debut album its due. “It’s as if the music has a life of its own and is determined to keep on breathing,” Tunador explains. “We are at the point in our lives where we understand the importance of doing what we love and we’re excited that the timing is aligned for this album to join the world with full promotion and availability across all platforms.”

The band admires British songwriters, citing as influences acts like Gomez, Spiritualized, and Black Box Recorder alongside fellow Pacific Northwesters like Built To Spill. As Peringer recently told Brooklyn Vegan, “Our writing process is basically that I walk around the house finger picking on the guitar, and then I record bits and pieces, and layer it and send it to Gilden to work on.” Tunador adds, “Robin and I share a mutual fascination with dark themes, but I seem to end up transmuting the darkness into a positive message when I write the lyrics. Robin will send me music and I’ll sit with it and listen awhile, and images, words and melodies will pop into my head.” According to Tunador, the album “navigates the positive and the negative within human relationships to ultimately find balance in love. You need to feel grief to heal grief,” she says. “Love is not just flowers and romance, but equal parts fear and worry that one needs to acknowledge in order to transcend.” To that end, Figg’s songs are intentionally recorded at a slow BPM to give space for reflection. “We want to take the listener on a contemplative journey,” Tunador explains. “It’s meant to be meditative.” Peringer offers an even more practical explanation for the slow tempos: “I wanted this music to be satisfying to Seattle drivers. The traffic has gotten so bad that you’re forced to drive ten miles an hour slower than the speed limit. Figg is good to listen to in Seattle traffic.”

“We should take a cue from Figg and find the beauty in the melancholy of pining.”-KEXP

FCC Warning: Track 10, “Song For Dwyer.” Our digital servicing includes a radio edit of this song.