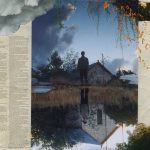 "Why is there a new Microphones album in 2020?" NPR asks at the onset of a recent interview with Phil Elverum, who has returned to the moniker after years of releasing music as Mount Eerie. The feature answers itself quickly, explaining that "'What was The Microphones?' is the better question and the one Elverum maps his newfound songwriting cadence upon, as run-on sentences excavate and challenge familiar lyrical references and sonic gestures." Elverum takes interviewer Lars Gotrich on a journey, beginning with the story of how he developed the hypnotic, slightly out-of-phase layered acoustic guitar drone tone that he employs so deftly on the new release. Dive in here.

"The Microphones in 2020" is a single song and almost 45 minutes long, but that's no reason not to play it on the radio. Don't be afraid. Just let the music and the story-telling carry you – and your listeners – away.