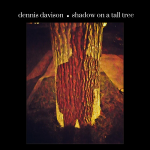 The Book of Strongman is the debut solo album by Dennis Davison, who was the lead singer and songwriter in the Grammy-nominated band The Jigsaw Seen. The band released nine masterful albums throughout their history, and were featured on numerous compilations and collections including the seminal Children of Nuggets box set. Davison’s songs can be heard in numerous tv shows and films such as Futurama and Shameless; he was also the lead vocalist for neo-psych pioneers United States of Existence, whose catalogue will get a vinyl release in 2020 on Spanish label Guerssen Records. All of the musical instruments on the album were played by Davison, using an adventurous instrumental template including Mellotron, Monotron, Rhythm Ace, Blipblox and an assortment of analog synths that enhance the atmospheric mood and complement the bass, drums, and guitars. Months of listening to “Robin’s Reign” and Faust surely helped guide the album in this unique direction.

The full album will be released on October 9, 2020. In the meantime, advance single “Shadow On A Tall Tree” soars like the sparrows that the song references.