New Music From B. Wurtz 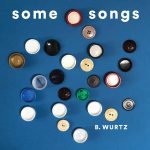 New York-based artist B. Wurtz, born in Pasadena, California in 1948, has made a name for himself over the past four decades by transforming the minutiae of daily life into poetic sculptures, drawings, and assemblages. Yet the renowned visual artist is also a musician who began studying piano as a child and taught himself guitar as a teen. A piano teacher once urged him to consider a musical career, but instead he felt compelled to focus intently on his art practice. His interest in listening to music never flagged, but performing did not become a part of his life again until a few years ago, in 2016, when his wife Ann gifted him a guitar for their anniversary. After some initial struggles with re-learning, his mind – sharpened by conceptual art work – quickly formed its own refined songwriting approach. He produced demos in Garageband, later adding lyrics that blended philosophical thought with direct observation. These songs make up Some Songs, B. Wurtz’s debut album, produced by Harlan Steinberger at Hen House Studios in Venice.

Wurtz met Steinberger in L.A. and became a fan of his work with Sunny War, who appears on the LP alongside several other musicians from the Hen House family including Micah Nelson (aka Particle Kid). Wurtz calls the record “an amazing collaboration,” saying that, “I thought of the songs I had written as basically being pop music, but resulting from the mixture of things that influenced me — classical music, i.e. Bach and Mozart; Sixties pop/rock, like The Rolling Stones; country music, i.e. The Carter Family; and traditional American folk music, meaning mountain and southern music as well as shaped note, sacred harp music. I had no overriding theme in mind for the album. The music and lyrics just seemed to enter me, coming from somewhere else. I find that fascinating. I followed the same pattern for writing all the songs, first the chord structure, then the melody, and finally the lyrics. It’s very fun, like putting a puzzle together.” Each track on Some Songs is accompanied with a music video by acclaimed photographer and filmmaker, Randi Malkin Steinberger. In her words: “Matching the sophisticated simplicity of B. Wurtz’s music was the beauty and challenge of making a visual companion to Some Songs… I had the luxury of witnessing the album. What an honor it was for me to take on that challenge of making a visual companion to his music.”

“B. Wurtz’s music is honest… He lives in a dimension that exists in the upside-down reflections in a spoon on the tablecloth sitting on the breakfast table at Lou Reed’s house, if Lou Reed lived in Mr. Rogers’ Neighborhood and Brian Eno was the mailman.” –Micah Nelson (aka Particle Kid)

“These songs move through so many contours of ideas and states of being… from playfulness to gently nuanced warnings. Full of love and loss and things intricately observed.” –Kristy Edmunds, Executive Artistic Director Center for the Art of Performance at UCLA