Random Lengths News Interviews Sunny War, Who Will Be Playing A Virtual Festival Soon Along With B. Wurtz, Particle Kid, Kronos Quartet, and more 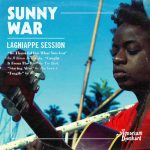 Random Lengths News reports that “musicians and poets from across the United States, Canada and Latin America will hold court from Oct. 28 through 31 at the Tune In Festival presented by the Center for the Art of Performance, also known as CAP UCLA.” Lots of A man A plan A canal-associated acts are participating, including B. Wurtz, whose Some Songs went for Radio Adds this week, Particle Kid, whose Window Rock made waves last year, and Kronos Quartet, whose 2017 album Folk Songs we helped promote. Performing on the festival’s final day, Halloween, will be Sunny War. RLN recently spoke to War in advance of the concert.

War has been performing remotely quite a bit since the beginning of COVID, but she told RLN that it’s still “weird… It’s just me sitting alone in my room. You think, ‘Should I talk to the camera?’ I guess you’re trying to make it like a live set, but you’re just alone.” Despite that, she’s done about ten of them and has excelled at each. Read the full interview here in advance of her performance.