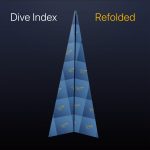 Refolded: Waving At Airplanes Remixes is the sixth full-length album from electronic composer/producer Will Thomas’ collaborative Dive Index project. The original Waving At Airplanes appeared in spring of 2020, at the height of the early pandemic turmoil. Exposé Online described it as “stellar, full of imaginative touches and interesting echoes,” while Electronic Sound compared it to “reading a short novel, energies and perspectives shifting throughout.” The isolation of lockdown gifted Thomas an opportunity to revisit a record that had been undeservedly overshadowed by global events; relocating his studio to the bucolic Ojai Valley, 90 minutes north of his Los Angeles base, he set out to reinterpret and remix songs from Waving At Airplanes.

These new versions are more deliberate, beat-focused, and at times darker/heavier than the original songs. Moods oscillate between understated house (“Wish I Had a Pulse”) and hip hop-inflected atmospherics (“Near Enough”), to the fluttering, shadowy brooding of “We Can’t Change the Channel,” and the title track’s nuanced, stripped-back strings. Thomas also invited Mike Lindsay of Tunng to remix the song “She’s Exploding,” and channeled his minimalist-electronic Plumbline moniker in reimagining the album’s title track with help from revered cellist Alison Chesley (aka Helen Money).  The original songs on Waving At Airplanes alternated between vocalists Natalie Walker and Merz, almost creating a dialogue between the two. Will set specific parameters on his production writing process, sourcing almost everything from modular synthesizer. The only exceptions were piano, acoustic guitar, and occasional extraneous sounds – nail gun, jackhammer – that leaked organically into the studio.

Notes on Waving at Airplanes: “Gorgeous and achingly expressive…,  [with] twinkling keys, shimmering synths and thumping low-end […] visceral and intimate.” -The Joy of Violent Movement

“The most serene, intimate of soundscapes imaginable.” -My Old Kentucky Blog “

Goes For Adds May 25