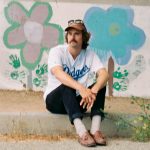 Still Waiting Still is “not perfect,” according to Ackerman, “just as nothing with a heartbeat ever is, but I hope that it represents some part of me that perhaps I could not express any other way.” Advance single “Good Song,” he confesses, came “out of my frustration in feeling the pressure to make ‘likeable’ music. I was constantly feeling mostly self-imposed pressure to write a ‘hit song,’ and I remember being able to finally take a step back from that mindset and look at it humorously. Why not write a song about trying to write a good song?” The album will also include “Full Grown,” originally a spare song written when the 28-year-old was only 20, which has now been given a full production makeover for inclusion on Still Waiting Still.