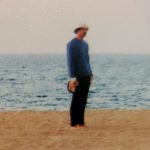 Newest advance single “Mr. Moon” is getting praise from Stereo Embers Magazine, which says the song is “shimmering with delicacy and strength” and calls it “two-and-a-half minutes of utter sonic perfection.” Yes, according to Ackerman, Still Waiting Still is “not perfect, just as nothing with a heartbeat ever is, but I hope that it represents some part of me that perhaps I could not express any other way.” Another advance single, “Good Song,” he confesses is a reaction to the “frustration in feeling the pressure to make ‘likeable’ music. I was constantly feeling mostly self- imposed pressure to write a ‘hit song,’ and I remember being able to finally take a step back from that mindset and look at it humorously. Why not write a song about trying to write a good song?” The album will also include “Full Grown,” originally a spare song written when the 28-year-old was only 20, which has now been given a full production makeover for inclusion on Still Waiting Still.

“As for Still Waiting Still, the album is as breezy as it is riveting–it’s a brilliant meditation on the quotidian life and its daily comforts and disruptions. Ackerman’s work is intimate and confiding and played with the kind of commanding interior strength that gives it an instantly timeless quality.” – Stereo Embers