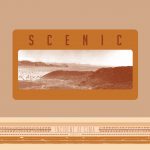 Scenic’s first album was mature and focused. “The concept of Incident at Cima was to make an all-instrumental soundtrack for the East Mojave Desert,” said Scenic’s Bruce Licher, the head of IPR. “I’m excited to be able to reissue Scenic’s debut album as an expanded edition so that we can upgrade the artwork and share some early demo recordings as bonus tracks to give fans a window into how the album came together.” Scenic’s debut features Licher, also the guitarist for Savage Republic, former Shiva Burlesque bassist James Brenner, and drummer Brock Wirtz. Guest musicians included Jeffery Clark (Shiva Burlesque,  IPR co-owner), Robert Loveless (ex-Savage Republic/17 Pygmies), Chris Manecke (Abecedarians) and John Ganem. Together they created an aural all-instrumental masterpiece that, according to David Fricke in Rolling Stone, “suggests Ennio Morricone dune-surfing in Death Valley.” Four of the tracks from Incident at Cima were used to great effect In Stuart Swezey’s feature-length documentary Desolation Center, including the track “Carrying On To Cadiz,” which underscores the opening title sequence of the film. Additionally, Turner Classic Movies (TCM) used Incident tracks in promotional spots for “Spaghetti Western Month” in 2001.

“Straight-up gorgeous all the way, clear about what it’s suggesting, but free of cliches and imaginatively played… a soundtrack that suggests particular images without an actual film to go with it.” – College Music Journal (CMJ)