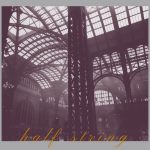 Post-punk.com, which included Half String‘s 1996 release A Fascination With Heights in its 2018 list of “Essential Dream Pop Releases,” recently premiered the band’s new video for “The Apathy Parade.” The video accompanies the recent Independent Project Records re-release of the record, which has a whole lot of bonus material tacked onto it. Post-punk.com writes that the song “is one of several defining tracks from A Fascination With Heights…, the song goes straight for the throat immediately… with the a band firing on all four cylinders. The track takes an unexpected turn at the halfway mark, slowing down to a more melancholic sway… before the song comes to a crashing, chaotic conclusion.”

Enjoy “The Apathy Parade” here, and read more about the record’s backstory and the gorgeous album artwork redesign. A Fascination With Heights is at radio now.