New Music From Moon and Bike 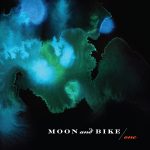 Moon and Bike is an instrumental guitar duo based in Portland, Oregon. Hard to pin down to a single genre, their use of acoustic and electric guitars to create lush, melodic soundscapes is at the core of their sound, which is influenced by the likes of Daniel Lanois, Michael Hedges, Cocteau Twins, and R.E.M.

Boone Johnson and Michael Swanson met in Eugene, Oregon in the 1990s and formed their first band in Portland shortly after. Throughout the years, they’ve collaborated both together and with other musicians in a variety of musical styles. They also score original music for film and work in sound design. Their 2020 debut album, One, is presented here along with two remixes featuring drums from John Gannon and production help from Dylan Magierek (Badman Recording Company). Currently, the duo is hard at work on the follow up, planned for release in 2022.

“Moon and Bike’s One goes beyond a mere acoustic instrumental record… and becomes the score to a deeply immersive experience. One is a near-perfect example of the atmosphere that can be created by two deeply in-sync musicians with a cinematic sense of composition.”  – Music-News.com

“This is moonlight music, or sunrise symphonies. It’s seraphic signals sent from above, a way of talking that’s way better than words, and which gets you to feeling that way as well.” – Breaking and Entering

“One is a work of art, replete with willowy surfaces and delicate timbres, all weaving a gloriously gorgeous tapestry of sound.” – Tattoo.com

“A bright, brilliant blend of electric and acoustic guitar, they hit the right balance between the two. Their deft interplay reveals two guitarists who truly listen to each other, bouncing ideas and gestures off each other with the utmost of care.” – Entropy Magazine