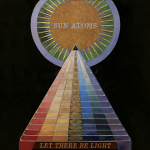 Volatile Weekly is into Sun Atoms' Let there Be Light, which it reviews in depth and calls "an album that refuses to be pigeon-holed… eight tracks that all loosely revolve around the star that blazes at the middle of the solar system; Let There Be Light fuses styles and sounds like a long-lost Basquiat painting found in deep space among comets and stars."

The site doesn't have the video for the album track "Captain Tunnel Vision," but it does have a link to that video, so that's something. Dig that right here.