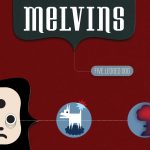 Says Sleeping Shamen, “Melvins need no introduction. I could make a pretty compelling argument that the Pacific Northwest legends are almost singlehandedly responsible for the creation of sludge, and grunge, and have had a massive influence on what went on to become stoner rock.” The band now has a massive, 36-song box set at radio now: Five Legged Dog. According to Sleeping Shamen, “it’s long, it’s weird, it’s Melvins, and it’s fantastic. Melvins sound almost as powerful acoustically as they do amplified. Dale Crover’s snare thwack is as prominent as ever, and Buzz Osborne attacks acoustically with authority when needed, pulling back and showing restraint when the song calls for it.”  Dig the full review here, and spin these tracks on the radio!