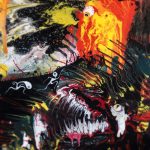 Rolling Stone recently featured the new Particle Kid single, which features contributions from Sean Ono Lennon and Mickey Raphael. Lennon told RS, “I think Micah and I both kind of like a kind of an instinct toward being a little more, I don’t know, off the beaten path, you know, alternative or whatever… I was raised around a lot of people making music professionally, as well. I always admired my brother [Julian] for doing that mainstream thing, but also sort of found my own way and being more alternative. I think Micah and I have a similar sort of a personality in that way.” Read all about it here, and enjoy the video for the new song!