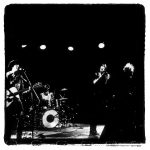 Creators of what Uncut Magazine editor Allan Jones lauded as “…timeless, brilliant music” Shiva Burlesque was founded by transplanted northern Californians Jeffrey Clark and Grant-Lee Phillips, emerging from the alternative music scene of subterranean Hollywood and Downtown Los Angeles in the mid-1980’s. Drawing comparisons to everything from John Cale to Echo & the Bunnymen to early Leonard Cohen, and described by All Music Guide as “… a powerful and graceful band too post-punk to be folk rock, and too folk to be post-punk”, the group forged its eclectic (and at times hallucinatory) sound in Raji’s, the Anti Club, The Scream and similar fly-by-night L.A. venues of the time. Shiva Burlesque released a pair of vivid, multi-faceted albums: Shiva Burlesque (1987) with drummer Joey Peters and bassist James Brenner; followed by Mercury Blues (1990), again with Peters on drums, Paul Kimble replacing Brenner, and with featured cellist Greg Adamson. Between the two albums the songwriting output by Clark and Phillips elevated into high gear, and the band recorded a number of new songs in demo versions, mostly on a home studio eight-track cassette machine with Paul Kimble engineering. Work began on the Mercury Blues album proper in early summer of 1990, tracking (largely after-hours during “down time”) at Village Recorders, one of the best equipped, finest sounding, studios in Los Angeles at the time. Along with the intense and potent results of those sessions, IPR’s beautiful, remastered, 2022 reissue includes a bonus album of ten of the demo songs, none of which have ever been previously released. Although both Shiva Burlesque albums garnered high praise in the US and in Europe and resonated deeply with tuned-in listeners, they found scant commercial success in the proto-Grunge / pre-Shoegaze era and the group disbanded in late 1990 (thereby helping to midwife the also excellent Grant Lee Buffalo).