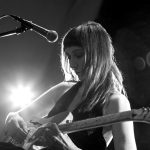 Visions, a website in Germany, recently shared Alison Clancy‘s “Mutant Gifts,” which she recorded at a church called St. John’s in New York’s West Village. According to Google Translate, the site says “Her songs and sounds are mostly of a shady nature, and her guitar is often a tool for creating smooth drones. In part, her pieces act like a bridge between the 90s / indie sound of PJ Harvey and that of the gloomy chanteuse Chelsea Wolfe to Marissa Nadler.” Read more, and hear the song, here.