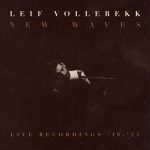 New Waves (Live Recordings ‘19-’21) is a collection of recordings from Leif Vollebekk’s live performances from between 2019 and 2021. The set includes five songs from his 2019 LP New Ways as well as “Long Blue Light,” released as a single in 2020.

Of the album, the Montréal-based songwriter states, “Last year I had a chance to revisit these songs and I realized they had something my records didn’t have. They resonate with that incalculable energy of a live audience. It didn’t matter whether they were listening to FM radio on the freeway, watching a CBS broadcast of The Late Late Show at home or standing right there in front of me at the Troubadour in LA. The audience completes the music. They inform it and they shape it. They’re on the other end of the frequency and they make new waves of their own. That symbiosis is something during these past two years I’ve missed more than anything. And I feel it on this record. The thing about live music is that, until about a hundred years ago, it was the only kind of music there was.”