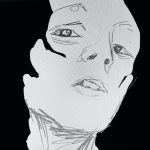 On his latest project, singer, songwriter, and multi-instrumentalist Particle Kid (J. Micah Nelson) pulls listeners down the rabbit hole to experience the music he’s been making over the past five years. Described by Rolling Stone as a “trippy troubadour” and a “musical polymath who combines an indie DIY aesthetic with a questing hippie spirit and a relentless work ethic,“ Particle Kid is a constantly absorbing and evolving musician who has both musical DNA and professional experience backing Neil Young (along with his brother Lukas Nelson & Promise of the Real), collaborating with John Doe, Tinariwen and the Flaming Lips and working on his own projects like the psych-punk orchestra Insects vs. Robots. Micah’s dad, Willie Nelson, helped name his band: Micah rolled into the house one day and Willie meant to say, “Welcome home, Prodigal Son!” but he had just burned a fat one and it came out as, “Welcome home, Particle Kid!” instead.

His self-described “experimental future-folk solo project” is releasing a sprawling epic, Time Capsule, in April 2022. The album takes listeners on a nearly two-hour trip through various genres, ideas, and sounds, creating an eclectic palette of sonic colors and feelings – both familiar and exploratory – painted together like a collage. It sounds as if 90s alt, 60s psych, 70s electric jazz, and some abstract future were all magazines—chopped up and somehow cohesively glued together by Nelson’s voice and lyrics. The album feels like an organic, laidback friends and family affair, with many of the guests and influences being the people he plays and tours with. “Velocirapture (The Serpent Flew),” featuring Sean Lennon on vocals, guitar and mellotron, was written while super-stoned, wide awake and daydreaming about dinosaurs. Fittingly, since this record recalls at times both Dinosaur Jr. (one of Micah’s favorite bands) and Sebadoh/Sentridoh/Lou Barlow, “Someone Else’s Dream” features J. Mascis on guitar. About the most recent advance single, “Along The Timey Road,” Nelson says, “I’ve always loved the idea of writing a letter to your future self and putting it inside a time capsule – reflecting back years and years later, realizing how much you’ve grown and maybe what you’ve lost and must try to regain. This song is kinda a twist on that; the idea is essentially a letter/transmission from the future-self to the present-self, in hopes the message to stay humble will be received somehow.”